Bronchiolitis: here are the signs of aggravation to spot in children

With the strong progression of bronchiolitis in France, the government decided to launch, on November 9, the “white plan”. Although in most cases this disease is “mild”, some symptoms may worsen, causing complications for children.

Vigilance is key. In the midst of an epidemic in infants, bronchiolitis is considered, in most cases, to be “mild” and can heal spontaneously within a few days. But sometimes symptoms related to this epidemic can worsen and, therefore, require a visit to the emergency room.

For the High Authority of Health (HAS), “the acute phase of bronchiolitis lasts on average ten days. An isolated mild cough may be observed for up to four weeks. However, if the child feels tired and / or is less responsive or, conversely, very restless after the nose wash, it is advisable to consult the doctor again.

Also, it is recommended to go back to the doctor if the child’s breathing is faster, if he becomes embarrassed to breathe and digs his chest or if he drinks less well over several consecutive meals.

In addition, the HAS considers that it is imperative to contact 15 or 112 when the child has pauses in breathing or feels unwell or when his breathing becomes slow and feels discomfort. If the child refuses to hydrate, turns blue around the mouth or is very tired and sleeps almost all the time, do not hesitate to call for help.

The government site Service-public recommends going to the pediatric emergency room if the child has these aforementioned symptoms and is less than six weeks old, less than three months old, born prematurely or suffers from heart disease, respiratory disease or an immune deficiency.

Hospitals on the alert

While bronchiolitis has been steadily increasing for several weeks throughout the country, the government has decided to trigger the white plan since November 9th. This system aims to “strengthen the capacity of health authorities to guarantee a coordinated response in each territory”, according to the Ministry of Health and Prevention. 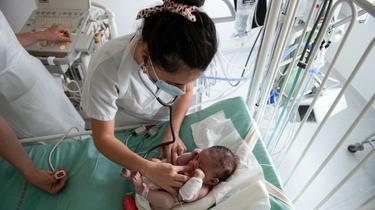 According to the latest figures published by Public Health France for the 45e week of 2022 (from November 7 to 13), bronchiolitis now affects 17 French regions, or 85% of the entire territory, and its level is “very high”. Hospitalizations represent, for the second week in a row, half of hospitalizations following a visit to the emergency room in children under two years of age.

Mosquitoes greater than double this summer time than in 2019

vaccination concentrating on Omicron begins, what you have to know

diet, advantages, 5 good causes to eat extra of this crucifer

Diabetes: we clarify to you why France is at present experiencing “sturdy provide tensions” of medicine