The S of SARS-CoV-2 is a multi-domain trimeric glycoprotein with a dense coating of glycans. The polybasic cleavage web site (arginine-rich peptide sequences) of furin (FCS) in full S (FL-S) enhances binding to host cell receptors after being cleaved by furin or transmembrane protease serine 2 (TMPRSS2 ). The elevated proteolytic cleavage of FL-S into S1 and S2 subunits was attributed to a polymorphism between the amino acid (AA)/glutamine (Gln)675 and proline (Professional)681 peptide residues previous the FCS. Notably, this SARS-CoV-2 S peptide area additionally harbors a number of serine (Ser) and threonine (Thr) AA residues that may carry N-acetylgalactosamine (O-GalNAc) glycans. In accordance with the authors, Ser/Thr-linked O-GalNAc glycosylation impacts furin and TRMPSS2-mediated S cleavage.

This AA portion can also be essentially the most vulnerable to mutations; subsequently, in SARS-CoV-2 (VOC) Alpha and Delta variants, a number of mutations are harbored between Pro681 to histidine (His) and arginine (Arg), respectively. In all Omicron sublines, together with BA.1, BA.2 and BA.5, mutations are discovered at P681H and N679K. All of those mutations have an S-proteolytic cleavage-enhancing impact. Learning this peptide stretch in SARS-CoV-2 S poses an analytical problem because of its biosynthetic complexity and the shortage of a consensus peptide sequence. Furthermore, there’s a lack of knowledge on the abundance of glycans, their web site(s) of attachment and their structural affect on proteolysis. Moreover, research have barely examined the function of SARS-CoV-2 COV mutations on O-GalNAc glycosylation.

There’s a household of 20 GalNAc transferase isoenzymes, GalNAc-T1 to T20, whose substrates range. Figuring out the glycosylation websites of every GalNAc-T may result in a greater understanding of the biology of O-glycans. In a earlier research, Ten Hagen et al. discovered seven isoenzymes able to introducing GalNAc into S. SARS-CoV-2.

In regards to the research

Within the present research, the researchers used a chemical engineering tactic referred to as bump-and-hole (BH) engineering to review particular person GalNAc-T isoenzymes within the residing cell. Moreover, they emphasised that improved fragmentation-based glycopeptide sequencing may allow improved evaluation primarily based on mass spectrometry (MS).

First, the researchers incubated wild-type (WT) recombinant SARS-CoV-2 pressure S with P681R (or P681H) constructs produced in human Expi293-F cells with WT or BH variations of GalNAc- T1 or T2. Subsequent, they proceeded to prime these constructs with the nucleotide-sugar uridine diphosphate (UDP)-GalN6yne. They labeled the glycosylated variations by copper(I)-catalyzed azide-alkyne cycloaddition (CuAAC) for visualization through the streptavidin blot. This therapy made it potential to introduce GalN6yne in an isoenzyme-specific method whereas conferring on the glycopeptides a further constructive cost which facilitated evaluation by MS. 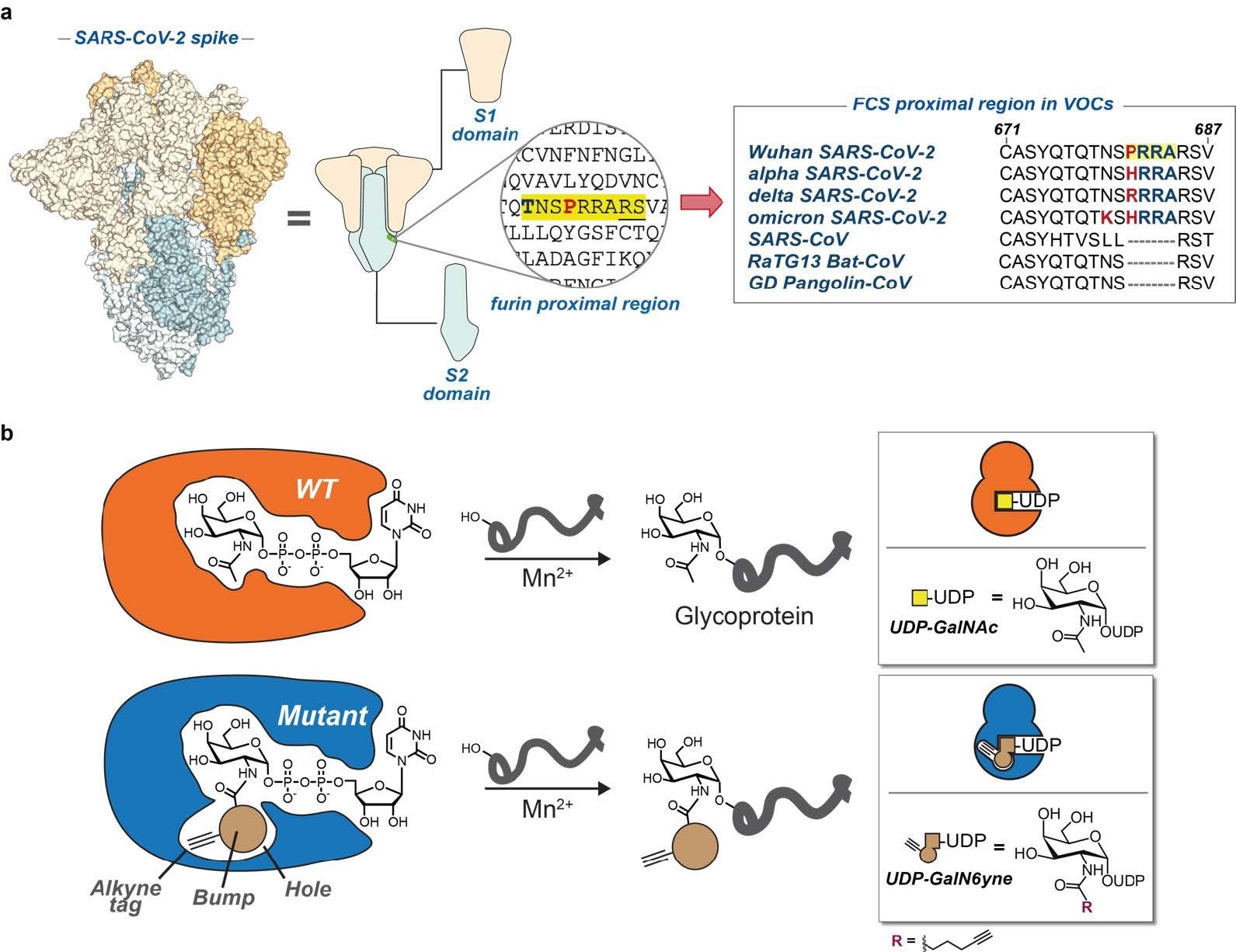 a) Mannequin and drawing of the SARS-CoV-2 spike. Furin cleavage web site and peptide alignment for COVID-19 variants of affected and associated coronaviruses. The polybasic motif of SARS-CoV-2 is highlighted in yellow. Daring and crimson characters correspond to amino acid modifications at positions 679 and 681. b) The bump and gap method permits the particular labeling of the GalNAc-T isoenzyme of glycosylation substrates utilizing the clickable substrate UDPGalN6yne . FCS = furin cleavage web site; VOCs = variants of concern.

Subsequent, the staff subjected the FL-S and S1/S2 subunits to gel digestion and analyzed them by tandem MS (ETD). They used high-intensity collision-induced (HCD) dissociation to acquire the bare peptide sequences and glycan composition, after which used the diagnostic ion I-tagged-GalN6yne to set off ETD fragmentation of the peptide spine. The researchers additionally validated the outcomes of the research in vitro. For this goal, they used glycosylation of recombinantly expressed S-proteins with soluble variations of BH-GalNAc-T1 and BH-GalNAc-T2 and CuAAC with I-labeled azide and MS glycoproteomics evaluation.

Glycosylation modulates proteolytic S processing relying on distance to the cleavage web site and glycan composition. The staff due to this fact straight investigated whether or not O-GalNAc glycans on Thr678 modulated S cleavage by furin utilizing artificial substrate peptides lively by Förster resonance power switch (FRET). Peptides spanning Gln residues 672-689 contained N-terminal 2-aminobenzoyl and C-terminal 3-nitro-Tyr as fluorescence-donating and quenching moieties, respectively. A rise in fluorescence depth signifies furin-mediated S-cleavage. First, they in contrast non-glycosylated substrates comparable to the WT epi (FRET-1) and the P681H mutant epi (FRET-2). As well as, they subjected the recombinant TMPRSS2 to the glycopeptide FRET substrates FRET-1, FRET-3, and FRET-7 to FRET-9.

Disruption of O-GalNAc glycosylation was a serious driving pressure within the evolution of SARS-CoV-2 VOCs, based on the authors. Within the evolutionary trajectory of COVs from SARS-CoV-2 Alpha to Delta and Omicron COVs, notable modifications in AA sequences previous the SFC indicated that proteolytic cleavage steadily elevated with rising COV infectivity. The analogous mutation discovered on the extra transmissible COV Delta (P681R) has additionally been linked to elevated furin cleavage, suggesting an evolutionary trajectory that suppresses O-glycosylation earlier than rising intrinsic recognition by furin.

Not like the P681H mutation detected in early variants corresponding to Alpha, the N679K mutation in Omicron didn’t have a considerable affect on glycosylation however resulted in elevated furin cleavage of artificial peptides. These FCS-proximal mutations acted synergistically and advanced to suppress glycosylation and improve furin cleavage.

The current research established that O-glycosylation is a key determinant of SARS-CoV-2 S cleavage and maturation. It is also a vestige of ancestral strains of SARS-CoV-2 misplaced throughout viral evolution.

The researchers demonstrated that GalNAc-T1 initiates glycosylation at Thr678 in residing cells. The glycosylation web site at Thr678 of S (not close to FCS) explains why a single GalNAc residue was inadequate to modulate furin exercise and had solely a weak affect on TMPRSS2 exercise. Quite the opposite, elaboration and sialyation abrogated furin exercise by as much as 65%. Equally, O-glycosylation negatively impacted S cleavage by TMPRSS2, with O-glycans containing core 1 (Galβ1-3GalNAc-) disaccharide having essentially the most impact. Total, the research outcomes spotlight the necessity to use extra superior glycan tracing strategies to review the evolution of SARS-CoV-2.

bioRxiv publishes preliminary scientific stories that aren’t peer-reviewed and due to this fact shouldn’t be thought-about conclusive, information medical observe/well being habits or be handled as established data.

#Olinked #sialoglycans #have an effect on #SARSCoV2 #tip #cleavage