“Prices are expensive”, “We have fun”: what assessment for the two weeks of vacation at the Coast?

Clearings were rare during the holidays. A weather that has undoubtedly discouraged day tourists. They were 540,000, or 10% less compared to last year.

After two years marked by the health crisis and with it, a limitation of travel, foreign holidaymakers have found their way back to the Belgian coast during the winter holidays (Christmas), according to figures published on Sunday by Westtoer, the office tourism in West Flanders. The number of day tourists and those who stayed on the Coast is down slightly.

Despite the capricious weather, the tourist sector of the Belgian coast draws up a positive balance sheet. In total, the coast saw 540,000 day tourists pass by, which represents a 10% drop compared to last year. The crowd was the highest on December 27, with some 60,000 tourists enjoying the pleasures of the sea. Residential tourism is also down, by 5%, with a total of 1.7 million overnight stays. Like every year, it was New Year’s Eve that welcomed the most people. A young holidaymaker interviewed for RTL INFO 13h explains the reasons for his visit: “For a weekend and a bit to get some fresh air. We don’t forget everything and we have fun.” A couple remarks to him: ““The prices are expensive. It has gone up.” 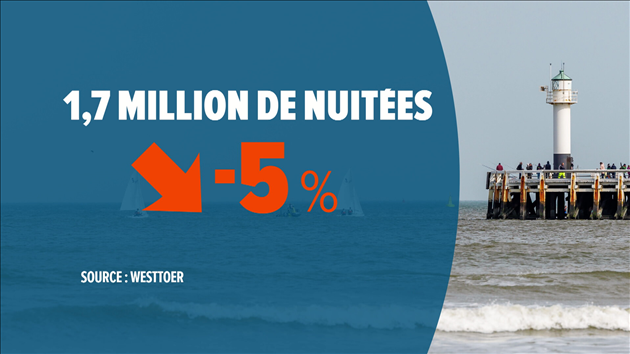 Coastal hotels recorded an average occupancy rate of 70% for the end of the year, compared to 75% in 2021. The number of German and French customers doubled compared to the Christmas holidays of the last year, while the proportion of Dutch visitors has fallen somewhat after a peak observed in 2021.

The Westtoer regional office explains both the increase in foreign tourists and the decrease in national tourists by the lifting of travel restrictions, which were in force during the health crisis. The return of foreign tourists moreover compensates for the loss of Belgian tourists and allows the Coast to regain its level of attendance before the pandemic, underlined Westtoer.