“There are more French and Poles working in Flanders than Walloons in Hainaut”: an N-VA MP tackles Wallonia and its unemployment rate

Over one year, the number of unemployed job seekers increased by 3.6% in Wallonia, by 0.5% in Brussels and fell by 0.5% in Flanders. The south of the country is “swimming” in unemployment while Flanders is gaining employment. According to the N-VA, the problem comes from unemployment benefits and the CPAS deemed too high compared to the salary that a person would earn while working. On the set of It’s not every day on Sunday, N-VA MP Kathleen Depoorter did not hesitate to say what she thinks, believing that the unemployment law should also be reformed. “We really have to activate people if we want to get out of this abominable budgetary situation, people have to go to work”she launched. For her, we must start by limiting the duration of unemployment. “We are the only country where there is no time limit on unemployment benefit.” Yes to the relief system and solidarity aid, but “When you go back to work, you can’t be punishedshe believes. We see that the allowance is a little bit lower than the salary, there is not enough difference.”

Kathleen Depoorter also points to the “rigidity” of the system. “When I look at West Flanders which has the highest vacancy rate in Belgium which is very close to Hainaut, with the highest unemployment rate in Belgium, I see that there are more French and Poles who work in West Flanders than Walloons. There, we have a problem and it cannot be the language barrier, because the French speak French”continues the right-wing MP.

Words that do not pass with the socialist Pierre-Yves Dermagne, Deputy Prime Minister and Minister of Economy and Labor. “We must nevertheless remember that the major trends of recent years have been a significant drop in unemployment, certainly more significant in Flanders than in Wallonia and especially than in Brussels”he says, admitting however that there is still work to be done.

But he ensures that every day, thousands of people who are unemployed and who receive benefits or the CPAS, have activities, are controlled and sanctioned “in part” when they do not make enough effort to seek work. work or training. “He when you benefit from public support, public assistance, an allowance, there must be a form of duty that accompanies this benefit”emphasizes Deputy Prime Minister and Minister of Economy and Labour. 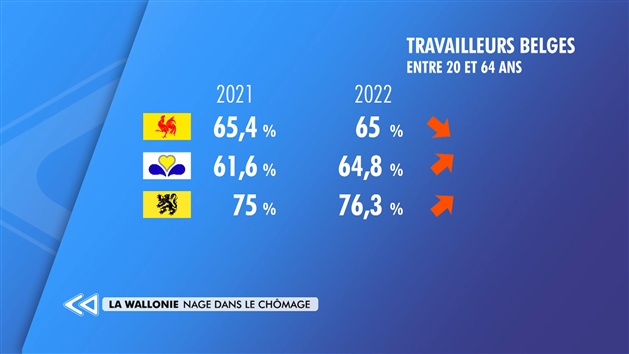 Faced with these figures, which represent the evolution of the rate of Belgian workers in the three regions between 2021 and 2022, Pierre-Yves Dermagne is however showing bad faith: “Unemployment has fallen structurally in Wallonia for years too, there is still work to be done but it has fallen and the gap is slowly narrowing (…) The figures, we can make them say what we wants. By taking a reference month, we can have a significant increase”he said.